The great statesman Thomas Cromwell was responsible for the 1538 Act of Parliament requiring every parish in England and Wales to maintain a record of births, marriages and deaths.Initially, the Act requiring parishes to keep a written record was not popular as coming as it did alongside the immense upheaval of the Reformation, it was seen as a further way in which the King could tax the people. In fact, this was not the case, no tax was raised on the back of these records. However, this system of record keeping was not generally accepted until the reign of Henry’s son, Edward VI. A further enactment in the reign of Elizabeth I required that records be made on parchment, with any previous records having been made on loose pieces of paper being copied into parchment books. In addition, from 1598 a copy of all records made had to be sent to the diocesan bishop every year. These records are generally known as Bishops Transcripts (BTs) and are key resources when the originals may have been lost or destroyed

The parish church of Thistleton is fortunate to have a copy of some of its earliest parish records. In beautiful copperplate handwriting, the copy is a wonderful record of the births, marriages and deaths of our ancestors who were living in Thistleton between the years 1574 to 1799.  The copy appears to have been assembled from four original registers, books I - IV. However, from the slightly ad hoc way in which the entries have been written, it’s likely that some of the original entries were written on loose papers or parchment which were then collated together. Much more than just a record of births marriages and deaths, there are many details within the four books that give us clues to the major and minor events that affected the lives of Thistleton residents over a 200-year period. Here are a few examples 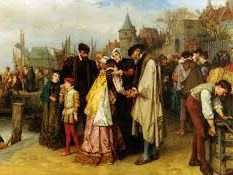 The French Protestants – the Refugees of 16th and 17th century England

Interestingly, the first entry in Thistleton parish records does not list a birth, marriage or death, but a charitable collection.

The entry, placed out of date order on the first page of the book, was likely made originally on a loose piece of paper or parchment and later copied in to the parish record as being of significance or interest.

The French Protestants or Huguenots were followers of the teachings of the theologian John Calvin. Violently prosecuted under the French catholic monarchs of the 16th and 17th centuries, they fled their homeland setting up large communities in England, protestant Europe and the Americas. Particularly large numbers of these refugees arrived in England in the 1680s, which fits nicely with the record made in the register. Their plight was generally sympathetically felt by the English people, anti popery was at a peak and there was a general fear that what was being done to protestants in Europe, could spread to England under the present monarch, the Catholic James II. This translated into generous public donations such as the one made in Thistleton in May 1686. (The likely population for Thistleton at this time was between 110-120, most of whom would be employed on the land. The average daily rate of pay for and agricultural labourer in southern England in the 1680s was 11 pence per day.) It is interesting to surmise how news of the Huguenots plight reached the people of Thistleton in an era before mass media.

The huge number of protestant refugees settling in the UK, 40-50 thousand between 1660-1714 alone means that many of us will have Huguenot surnames and ancestors. Would any Huguenots have settled in Thistleton? Unlikely, as they tended not to have been agricultural workers in their home country but were artisans such as silversmiths or watchmakers. Many also were doctors, soldiers, teachers or merchants so once having found safety in England, they tended to settle in the towns and cities. 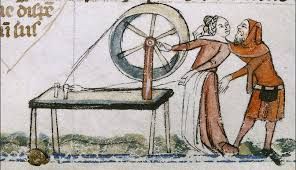 Several burial entries in the Thistleton records state that the body was ‘buried in wollen’ This refers to one of the strangest acts of parliament passed in this country during the 17th century, that being the requirement that no one should be buried in "shirt, shift, or sheete, other than should be made of wooll onely." In other words, you couldn’t be buried in your own clothes or in a cotton or linen sheet or shroud. The Burying in Woollen Acts of 1666-80 required the dead, excepting plague victims and the destitute, to be buried in pure English woollen shrouds with a punishment of £5 for noncompliance. For centuries wool had been key to the prosperity of England and as new textiles arrived from overseas during the 17th century, the great landowners, particularly in the wool producing areas of southern England, felt their livelihoods under threat. Thus, mandating burial of the body in wool only was an early attempt to protect the British woollen industry from overseas competition .